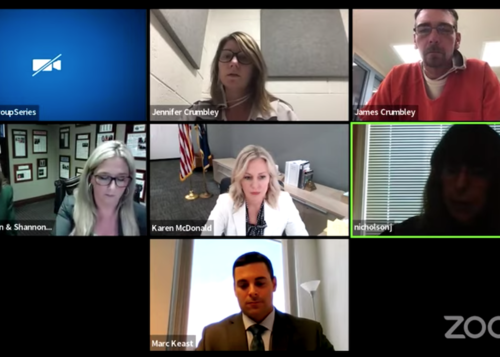 An Oakland County judge on Friday afternoon denied a bond reduction request by the parents of Oxford school shooter Ethan Crumbley, citing the possibility they could flee before their trial on manslaughter charges.

In keeping James and Jennifer Crumbley's bond at $500,000, District Court Judge Julie Nicholson noted the pair have ties to Florida, failed to turn themselves in when the charges were announced, and had their car hidden outside the Detroit building where they were eventually found by police.

The hearing represented a preview of the prosecution's case against the parents it says were grossly negligent and ignored numerous red flags exhibited by their son in the eight months before he shot up his school, killing four classmates.

Crumbley searched school shootings and firearms so frequently on his phone that he began to receive spam advertisements regarding his mental well being, assistant prosecutor Marc Keast said. He was also allegedly fascinated with Nazi propaganda, purchasing a Nazi coin from Amazon that he kept out in the open in his bedroom. A drawing of a Nazi symbol was also discovered beside a grocery list in an apparent family notebook.

"The evidence will show that Ethan Crumbley was gravely troubled, he was fascinated with firearms, he was violent, he displayed terrifying tendencies and behaviors, and he literally sketched out what he planned to do in his journal and his drawings," said Keast. "His parents ... did not intervene. They did not schedule therapy, did not investigate what might be in his room, on his phone, or his browser history. They didn't even keep their other weapons secure."

Beginning in March, Keast said Ethan Crumbley texted his mother multiple times that he believed there was a demon or ghost inside the house. In May, he filmed himself torturing and killing animals and kept a bird's severed head in a jar in his room for six months. He was also said to have made Molotov cocktails.

Crumbley laid out his plans for the shooting in his journal and a video filmed at home, Keast said. He also stopped doing school work and expressed surprise when his parents did not seem to notice. All the while, Keast said, James and Jennifer Crumbley kept their firearms unlocked and accessible, including, eventually, the Sig Sauer pistol they purchased for Ethan that would be used in the attack.

Prosecutors also presented new details about the Crumbley parents' behavior in several days following the shooting. James and Jennifer allegedly stayed in a hotel before relocating to the Detroit artist studio where they were discovered. They also gathered as much money as they could, prosecutor Karen McDonald said, draining Ethan's bank account of $3,000, pulling $6,000 from their own account, and arranging the sale of horses they owned in Florida. They also had four cell phones, two of which were burners whose numbers were unknown to law enforcement, she said.

When they were eventually discovered by police Dec. 4, their car was allegedly parked in such a way that their license plate was not visible and they remained hidden behind a locked door even after officers announced their presence.

Lawyers for the Crumbleys maintained the pair were trying only to avoid public attention when they failed to turn themselves in promptly. That had sought to reduce each of their bonds to $100,000.

Jennifer Crumbley is no longer employed, while James Crumbley worked as a DoorDash driver before he was arrested, McDonald said. Their Oxford home is up for sale.

Their next court appearance, a preliminary exam, is Feb. 8.

4 free Covid test kits can be obtained now by mail