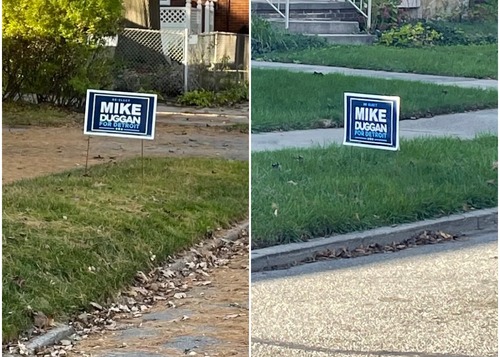 The city is clearing signs in some portions of the city, but not others. These remain on public easements in a northwest neighborhood. (Photo Violet Ikonomova)

City of Detroit crews are removing political yard signs from medians and sidewalk-adjacent strips ahead of the Nov. 2 election, in a move a resident and down-ballot candidate allege reflects political bias, but the mayor's office says does not.

Signs for Detroit Board of Police Commissioners candidate Scotty Boman and City Council candidate ML Elrick were pulled along a stretch of East Outer Drive in District 4 Friday morning as part of what the city says is a years-long effort to keep easements, light poles, intersections and other areas clear. The clearing "just gets more attention during election cycles," said Duggan spokesman John Roach.

The General Services Department, he said, pulls all signage — including that for Mayor Mike Duggan — from the areas where its dispatched. But Detroiter Wendy Clark, who said she opened her blinds Friday to find a city vehicle pulled up to take her signs, says she's convinced "something deeper" is going on.

The crews took signage from a stretch of Outer Drive with a high number of Elrick and Boman signs, and did not hit the portion of Outer Drive closer to Grosse Pointe, she said. Boman is trying to unseat Duggan ally Willie Bell on the oversight body and Elrick is opposed in his race by a dark-money group helmed by a former mayoral appointee.

Crews generally focus on commericial corridors and boulevards but are also sometimes assigned to clean up areas based on their own observations and citizen complaints, said General Services Department deputy director Jamal Harrison. A city ordinance prohibits the placing of signs on public property.

The Friday confrontation between Clark and the city workers escalated, with profanities hurled on both sides, she said. The 49-year-old lifelong Detroiter said she was particularly frustrated because the candidates whose signage she displayed had begun to restore her faith in local politics.

"I stopped believing in the people representing me and my city, I stopped voting years ago," she said. "Then these (candidates) came to my house in 90-degree heat and I thought well, maybe if they’re talking this talk and willing to change the corruption in my city, maybe I'd go back to voting this year. And now look what’s going on."

In a statement, Harrison said he'd spoken to the workers and their supervisor and was "comfortable that they acted entirely appropriately."

In Harrison's version of events, the workers told Clark she could keep her signs as long as she moved them to her side of the sidewalk, but that she refused, "became very upset," and placed the signs back where they were. From there, Harrison said the "employees did exactly the right thing by contacting their supervisor" who "rather than risk an escalating confrontation with the homeowner ... told them to stand down and let the sign stay where it was. When they left, the yard sign was where they had originally found it."

Clark disputes that account. She said workers never explained that the location of the signage was the problem and told her only that they were acting on orders to remove signs. Clark said they refused to put her in touch with their supervisor and in the end took her signs. Elrick and Boman have since brought her new ones, she said.

Boman, for his part, says he has filed a complaint with Detroit's Office of the Inspector General. The city, he alleges, was "suppressing peoples vote" by targetting the area where where "most of" his signs were posted.

But even if there's no nefarious motive, Clark says the incident has left her with an overarching question:

"What supervisor is wasting city of Detroit taxpayer money to send y'all out here for eight hours to snatch signs?"