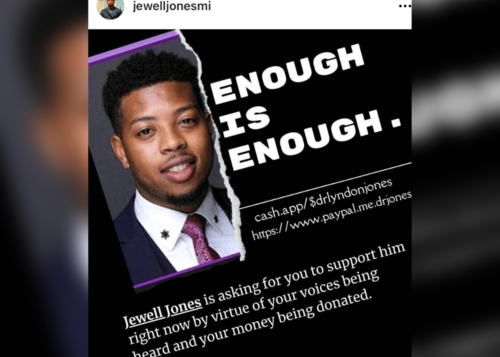 Embattled state Rep. Jewell Jones is fundraising from behind bars as he faces mounting legal troubles stemming from an April drunken driving arrest.

“Enough is Enough,” an Oct. 13 Instagram post with PayPal and CashApp links said. “Jewell Jones is asking for you to support him right now by virtue of your voices being heard and your money being donated.”

The post, which has since been deleted, left unclear what the 26-year-old Inkster Democrat is raising money for, and we could not immediately reach his lawyer or the apparent CashApp account holder for comment.

Politicians under criminal investigation have been known to open legal defense funds, but experts say those record contributors in order to identify potential conflicts of interest.

The ambiguous ask and personal fundraising by a politician does not appear in conflict with campaign finance laws on its own, as lawmakers can have other sources of income, says ​​Simon D. Schuster, executive director of the Michigan Campaign Finance Network.

“I don’t necessarily know if you would see this as a source of income, but really, Michigan does a poor job in that it doesn’t really track the business activity of legislature and legislative staff outside of the workplace,” Schuster said. “So we really don’t track conflicts of interest, and so it’s really difficult to say when someone might be getting a business opportunity or profiting because of their position.”

Political consultant Bill Ballenger says that while Jones’ request may be tasteless, it could be perfectly legal depending on what he collects, how it's spent and whether it's reported.

Jones, a House member since 2017, has been in jail since September for three bond violations after his release on charges of driving under the influence and resisting arrest. He faces additional charges after allegedly getting caught with a handcuff key on the first day of the stint.