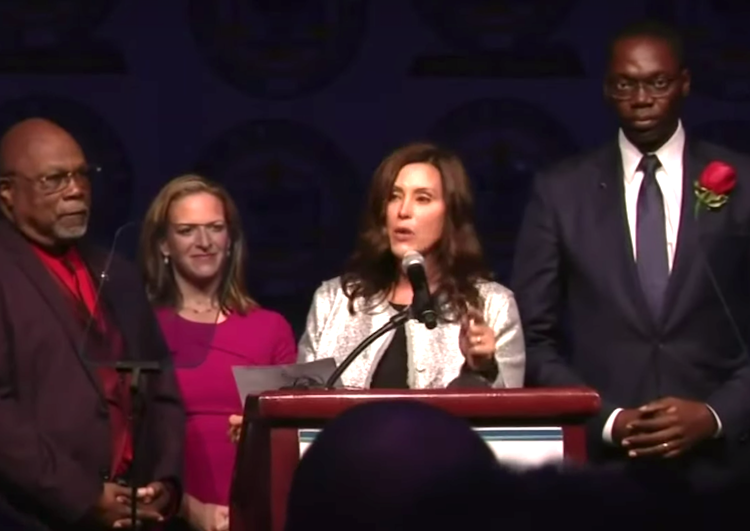 Gov. Gretchen Whitmer, up for re-election in 2022, announced Sunday night at the Detroit NAACP Freedom Fund Dinner in downtown Detroit that she vetoed four bills that would "weaken voting rights."

She said the goal of the bills was to "perpetuate the big lie" about fraudulent election results in 2020, The Detroit News reports.

"I've done a lot of signing ceremonies when I sign bills," Whitmer said to a standing ovation. "Tonight, I'm going to sign the veto letter in front of you."

In a letter to the state legislature on Sunday, she wrote:

"Today I am returning several election-related bills to you without approval. ...

"I am laser focused on kitchen-table issues that get things done for Michiganders, like fixingthe roads, ensuring clean water, and providing good-paying jobs. We can and should worktogether on election policy, as well –  but only in ways that strengthen our democracy. I amready to join hands with anyone who shares these goals."

Republicans disagree with her interpretation.

Rep. Ann Bollin, the Brighton Township Republican who chairs the House Elections and Ethics Committee, said about the bills, according to The News:

"This has nothing to do with perpetuating a lie. We found a weakness in the process and there is always an opportunity to improve. Who could think we had the largest election during a pandemic and there would be absolutely no room for improvement? I think we would be foolish to think that.”