Lapointe: Missing a Batter Not the Only Problem for Shoddy 'Bally Sports Detroit' Broadcasts

During Wednesday night’s Tigers’ telecast from Minnesota, Detroit slugger Miguel Cabrera came to bat with a runner on first base and nobody out in the top of the fourth inning.

What did he do? Home run? Double play? Strikeout?

When the telecast jolted back to the game, Cabrera stood on first base. (See video)

This is not the first time this has happened this baseball season on what was once Fox Sports Detroit. In recent years, FSD was bought by a right-wing media behemoth (Sinclair Broadcast Group) and re-branded – for a fat fee -- by a worldwide gambling company (Bally’s Corporation).

A few weeks ago, a similar production mistake on a Tigers’ telecast by BSD resulted in three consecutive minutes of commercials while the game continued.

These flubs must be due to a mechanical malfunction, right? It’s hard to know. Do these mistakes affect just portions of the audience or all the systems that buy it? Your guess is as good as mine. Phone calls and text messages to Bally Sports Detroit headquarters Thursday were not returned. 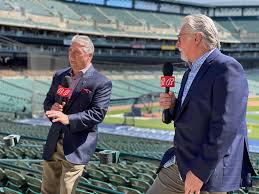 Perhaps they have bigger things to worry about. Jack Morris’s suspension for ethnic comments and Bally’s shoddy visuals all baseball season illustrate how the Tigers, Lions, Pistons and Red Wings aren’t the only Detroit sports operations needing to rebuild their brands.

Bally’s baseball camerawork is sloppy, its graphics presentation spotty and its rotating cast of voices makes for too much crosstalk and fake bonhomie.

Play-by-play announcer Matt Shepard – who has trouble judging fly balls and is prone to frothy platitudes -- gushes over co-workers Morris, Kirk Gibson, Craig Monroe and Dan Petry in the broadcast booth while another cast of Bally broadcast characters sit at a desk or roam sparsely-populated grandstands of Comerica Park.

While those on camera giggle and guffaw over stale gimmicks like “Pick the Stick,” the technical crew misses pickoff throws and the camera operators lose track of home runs.

Will viewers get more of this shabby show now that the seasons blend into Red Wings’ hockey and Pistons’ basketball games, both carried by BSD? Perhaps things will get even worse under the Bally brand, which began on March 31.

Above and beyond the flaws of the local BSD operation, the takeover represents larger cultural issues. It shows the sinister synergy merging sports, politics, media, money and gambling.

Sinclair, which bought 21 local Fox Sports outlets from Disney in 2019 for $10.6 billion, owns about 200 broadcast stations across the nation and sometimes sends out right-wing editorials that anchors must read on evening newscasts. Some scripts slam “fake news” of other outlets.

In 2016, Sinclair executive chairman David Smith told presidential candidate Donald Trump: “We are here to deliver your message.” Former CBS anchor Dan Rather referred to Sinclair as “An assault on our democracy.”

Perhaps we should be charitable to Smith. It’s been 25 years since he got busted for what Baltimore police called “perverted sex” with a prostitute. Wonder if Smith shared that anecdote with Trump?

A call to Sinclair’s posted business office phone number Thursday yielded only a recorded message urging viewers to call The Dish Network to complain about Sinclair’s local stations being dropped from their packages.

As for Bally, it paid Sinclair $85 million for naming rights over 10 years. Bally has its reasons. A recent analysis by the web site “Front Office Sports” said “The long-term plan is for viewers to be able to bet on games through an online Bally’s tool directly from their TVs.”

The story quoted Bally Chairman Soo Kim as calling this “An opportunity to revolutionize the U.S. betting, gaming and media industries.”

Kim is probably right about that. And that’s the problem. Not all revolutions are beneficial. During a pandemic that still keeps many people home and looking for diversion, Bally and Sinclair are hoping to capitalize on the wishful thinking of their mutual customers.

If they succeed, they will train a generation of suckers whose eyes will be entranced by TV sports images as they peck away at the I-phone casino in their hands.

Could anything bad possibly come of this sudden, common-law marriage between sports and gambling? Ha! Get ready for a bigger mess than that one, missed at-bat from Miguel Cabrera. (By the way, he got hit by a pitch).