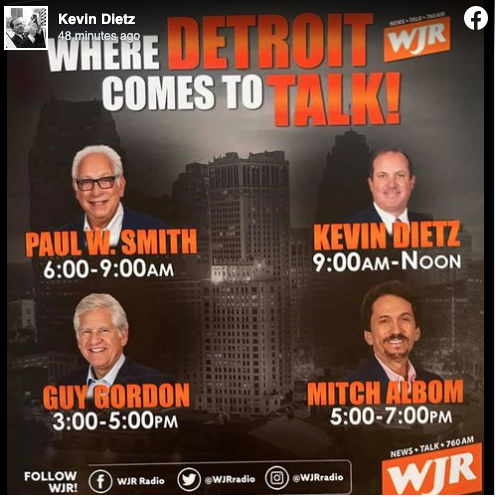 Kevin Dietz, a former WDIV investigative reporter, has become the permanent WJR radio morning host from 9 a.m. until noon, Monday through Friday, a slot that had been occupied by Frank Beckmann until his retirement in March.

Dietz, 56, who has been hosting the show since June 1, announced Tuesday on his Facebook page:

I took a pretty cool new job! Working 9am - 12pm Monday -Friday on WJR 760Am. I remember JP McCarthy as a kid on this station! I am blessed.

It's unclear if Dietz will continue to do the show solo or eventually with a co-host.

Dietz began his journalism career in 1988 at WPBN-TV in Traverse City and went on to work at WLNS in Lansing and Wood-TV in Grand Rapids before joining WDIV as an investigative reporter in 1993. During his 26 years at the station he won 17 Emmys.

Dietz, the station's top investigative reporter, was fired from WDIV in 2019 because of an off-handed joke he made about a Black reporter during an Investigative Reporters and Editors conference in Houston.

Dietz subsequently issued a statement at the time:

"The intent of my comment was to openly acknowledge, amongst team members, the challenge it’s been for our company, and many companies, to achieve diversity goals. This is a serious subject that I approached through humor. Nevertheless, the station has a zero tolerance policy on racially insensitive comments and they determined, despite the intent and context of my statement, that it violated the policy. I understand and support the need for such policies."

Dietz graduated from Brother Rice High School in Bloomfield Hills in 1983 and earned a bachelor degree from Western Michigan University in 1987.