Here we go again, again and again: Violent thunderstorms swept the state Wednesday and overnight Thursday, and more than 715,000 Michigan cutomers are without power on a day when the temperature is expected to reach 90 degrees. 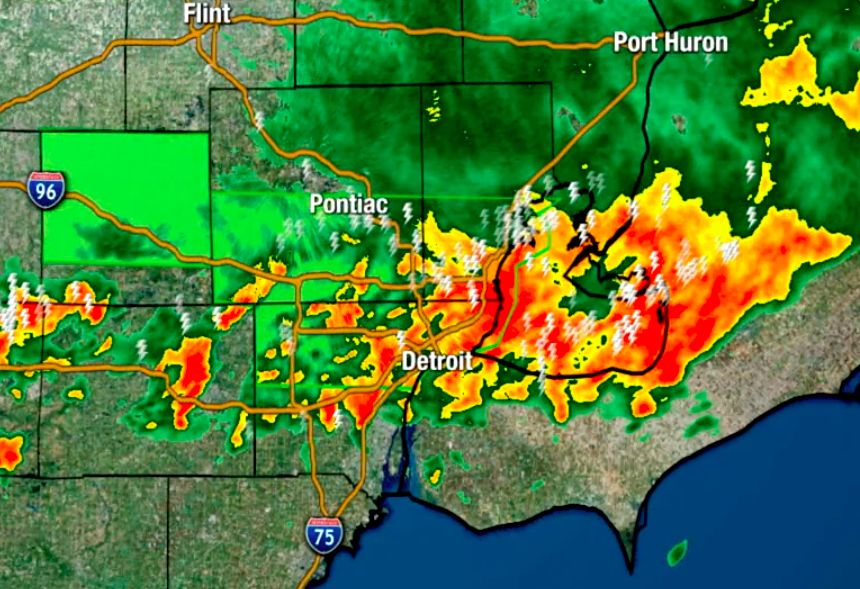 Another line of storms marched across the Lower Peninsula in the early morning, following those that came through yesterday. Total rainfall amounts were unavailable, but the Michigan Department of Transportation reports freeway flooding on I-75 and I-94. The stretch of I-94 near Dearborn was particularly hard-hit, as it's been several times this summer.

DTE's online outage map was down early this morning, but WDIV tweets at 11 a.m. that 600,000 of the utility's customers were blacked out.

The Free Press also reports the lack of electricity is widespread:

Heavy rains and 60 mph winds damaged more than 2,000 power lines, DTE said in a news release [earlier]. Teams will be working 16-hour shifts around-the-clock to restore power, as the company brings in 1,000 additional line workers from out of state to help with restoration efforts. DTE customers can expect a more accurate restoration estimate once a crew has been assigned to their outage, DTE said.

According to a statement on the Consumers Energy website, more than 200,000 customers were left without power after a powerful storm on Tuesday night. With Wednesday's storms and more turbulent weather forecast for Thursday, the company is bringing in additional crews from out of state to assist in restoring power.

It's the biggest power outage since a record-breaking March 2017 wind storm, which blacked out nearly one million cutomers statewide.

The good news? The weekend looks better, with cooler temperatures and lower humidity.