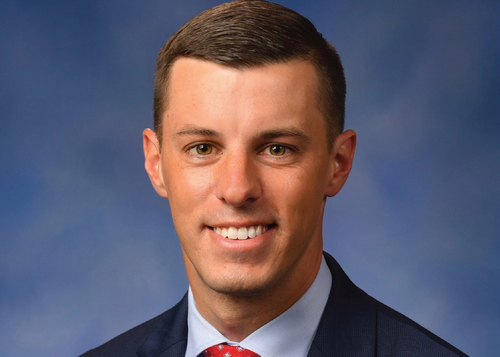 Former House Speaker Lee Chatfield's less-than-two-week tenure as CEO of a southwest Michigan economic development group has come to an abrupt end after a wave of backlash that saw multiple clients cut ties with the organization.

For the betterment of the Kalamazoo community, the businesses that the board of directors represent, the staff at SWMF and for the sake of my conscience, please see the letter of resignation I offered this morning. I remain grateful for having had this incredible opportunity. pic.twitter.com/loS4v0kH3t

Southwest Michigan First came under fire for the hire specifically due to Chatfield's past opposition to expanding state civil rights protections to LGBTQ workers and residents.

The 32-year-old Republican shared his resignation letter in a tweet Monday morning. It was unusual in that it appeared an attempt to also atone — including a lengthy, yet vaguely worded explanation for his past positions and the suggestion that he's evolved in some way.

"I've learned so much in the past seven years, and the meaningful relationships formed in the Legislature with members of different perspectives have guided and helped shape some of my personal views towards diversity and inclusion today," he wrote. "I believe that civil rights belong to every single person, because we’re all created equally before God. And I believe the fundamental purpose of government is to secure those rights."

“As a Christian, I believe the Bible ... And I don't want to feel I have to be quiet about that within this community so I could collect a paycheck ... And I can't truthfully apologize for various conservative beliefs that I espoused while in office."

He went on to say Southwest Michigan First deserves a leader with a "blank political slate that won't bring about the division that I'll unfortunately cost."

Calls for Chatfield's removal crescendoed as the city of Kalamazoo and community groups, including the Kalamazoo Promise and the Kalamazoo Community Foundation, ended their relationships with the development nonprofit over the hire.

Southwest Michigan First tried and failed to allay concerns by issuing a values statement last week. As part of that effort, Chatfield said he would now support expanding the state's civil rights act to ban discrimination based on sexual orientation and gender identity because "Those are the values of this company, and as CEO, I support those values."

On Sunday, the organization set its Twitter profile to private in an apparent response to continued online backlash.