The author, a former Detroit News reporter and press secretary for Mayor Dennis Archer, is a local political and public relations consultant.

All I wanted to do was hug my mother. But I couldn’t. All I could do was pass the groceries, keep six feet away and talk through a mask. All because of the coronavirus.

Yes, the same coronavirus that we in the black community heard rumors about – rumors that African-Americans could not contract the deadly bug.

What we’ve now learned is that COVID-19 doesn’t give a damn if we’re black or white, rich or poor, urban or suburban. Given the chance, the virus will find us, infect us and kill us if it can.

In Michigan, the virus is sweeping disproportionately through black communities like a California wildfire. On Thursday, we learned Detroit City Council President Brenda Jones has it. Last week, Detroit Police Capt. Johathan Parnell, 50, died from the virus. 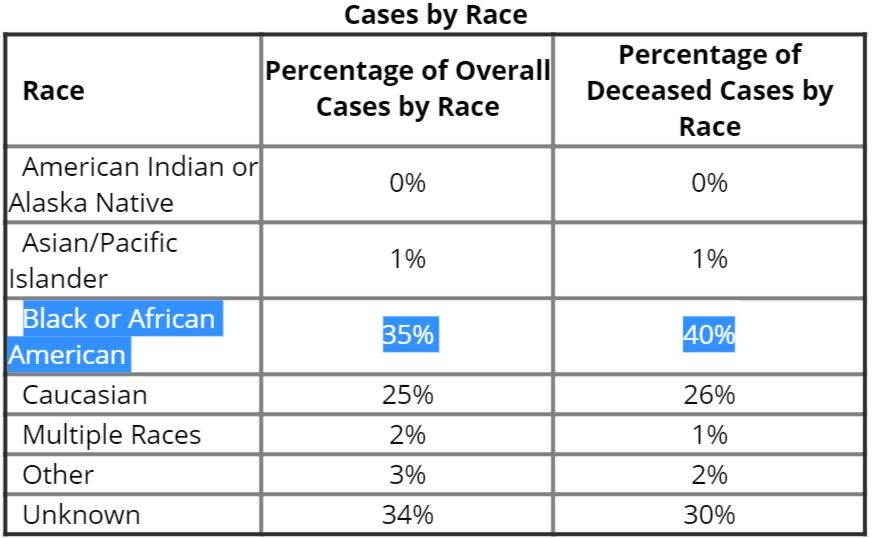 Among Michigan's 10,791 coronavirus patients since the pandemic struck here, at least 35% (3,777) are African American. Among the 417 who've died, at least 40% (167) are black, state data posted Thursday shows. Both figures likely are higher, as not all cases are categorized by race.

We shouldn’t be surprised. Messaging early on to the public from health officials from the feds on down was slow, confusing and lacked urgency. It’s a hoax! Don’t wear a mask! Only old people will get sick and die.

That left a big opening for stupid conspiracy theories and rumors and racist pseudo-science to run wild, with the dumbest one being melanin protects black people from the virus. You see, the thinking went, it’s not spreading in Africa.

Everybody got the same messages about staying at home, keeping your distance, washing your hands, and so on, but some people clearly believed the early false rumor and assumption that black people had some kind of melanin-based immunity to the virus. It was no secret the rumors were circulating and that health authorities did little to get in front of it and knock it down.

Now we are paying the price for this insanity.

In situations like this, the messaging needs to be modified to speak to communities who may not otherwise "get" that the messages include them.

Simply put, we dropped the ball in the black community.

Had we developed a smarter message to African Americans, we may have prevented folks from going to ballroom dances, cop parties and pancake breakfasts.

We have no problem reaching black folk during elections, drilling home a message. We know how to market music, gym shoes and liquor specifically to the black community. We need to apply that same marketing, communications and public relations knowledge to this pandemic – Now!

It’s not too late.

In Michigan, the virus is reportedly finding black people beyond Detroit -- in Southfield , Highland Park, Harper Woods and Grosse Pointe Woods at a disproportionately alarming rate.

Public health responses and messages in a pandemic that have a disparate impact on black and brown communities is the very definition of a racist policy. We need to address that.

Tonight at 7 p.m., Michigan Gov. Gretchen Whitmer will hold a TV town hall with all the state’s major television stations. I give her credit. She’s been doing a yeoman's job managing the state’s resources to stop the spread of the virus – closing everything, fighting for supplies, calling on the feds to do a better job. The stations have asked viewers to send in questions, so here’s one.

Governor, what about the black people? How are we going to address the public policy and healthcare system disparities that are literally killing black people in your state at a higher rate?